They say that too many cooks can spoil the broth What would one say if there is too much broth – does that spoil the cook? SO, I find myself with half-cooked posts not only on all the back-burners but there are some fairly hefty ones simmering on the front burners as well. It is that old problem – already covered on this bloggo I think – that once one has moved on from a place, new items of interest swoop in to grab the attention and the half-finished stuff starts to gather electronic dust in the Drafts Folder. In an attempt to clear out and give an airing to some things that seemed very important at the time I’m going to do some chopping and changing.

Recent events in Ecuador have put a very different slant on a piece that I started a month ago in the Galápagos Islands. What I wrote then has some bearing on the earthquake and its aftermath and I’d like to put the piece out pretty much as it was written and then write a postscript to it as I see it now. Hang on, here goes:

Puerto Baquerizo Moreno, San Cristobal, Galápagos: circa mid-April.
Tourism is a fickle business as I well know having studied it and then run a travel business in Europe for 15-years. So when it comes to my own trips overseas each new travel experience is approached with what I hope is a considered but open-minded perspective. I try not to over-hype my expectations and tread a ‘Middle Way’ between the Confucian “He who expects nothing is never disappointed” to the “I want it all and I want it now” mantra of the 21st-century thrill-seeking tourist. And so it was with a visit to the Galápagos Islands. There was no expectation of finding them in the same condition that a young Charles Darwin had in 1835 – as even then they had suffered over 300-years of human interference and mismanagement. There is so much that is wild, beautiful and unspoilt about the Galápagos and that was a rare privilege and huge pleasure to behold (and has been covered in the previous couple of posts). However, there are also parts that are ugly and chaotic – and inevitably these are the areas now populated by humans.

What upset me the most? In the main it was the total lack of any defined and cohesive planning control. In the towns on the inhabited islands there are buildings in various stages of completion everywhere you turn. Even many that are ‘finished’ are only painted at the front with the rear and sides left as bare concrete blocks: roofs sprout concrete pillars for possible further enlargement and bundles of rusted metal reinforcing bars twist and sprawl as though bent by some fierce storm. Washing hangs from the rebar, blue plastic water tanks sit high above with pipes snaking down into living rooms, piles of building materials sit patiently next to bicycles and washing
machines, the detritus of everyday life out on display. It is at the same time supremely banal and horribly post-apocalyptic: housing unintentionally looking as though it has just been through some cataclysmic event. These towns are as ugly as anything you will see on the mainland with virtually no attempt being made to insulate them or make them energy efficient on a remote archipelago with scant water and power resources.

This building in increments, by the truck load of blocks, by the pay-check, is typical across developing regions. Virtually nothing is ever completely finished, everything is a Forth Bridge type of project in that once one gets to the end, many years down the road, one has to recommence at the beginning. A world in which everything looks like a giant building site, functional up to a point but aesthetically a disaster. Bizarrely the town roads here on San Cristobal have been laid out very attractively with coloured brick paving and local stone used as pavements. There are mosaic sculptures of Galápagos wildlife, pretty shaded seated areas and some well-planted trees and shrubs. But, with a very few exceptions, the majority of the built environment is an eyesore that could have been avoided with better planning and consultation. Even the President Rafael Correa has spoken of the “disorder, abuse, anarchy and lack of policies” that afflict the Galápagos and it is hoped that recent new appointments to the National Park Committee may go some way towards improving the situation.

As a small aside, and to throw one more log on the bonfire of my discontent, the plethora of gift shops also adds to the tackiness of it all. There are one or two nice looking shops with quality merchandise for sale but in the main the quality of what is for sale falls into the ‘tourist tat’ category: poorly made, cheap, and utterly unnecessary. It is almost certainly destined for an imminent visit to whichever landfill site happens to be closest when it reaches its next destination. The nadir of all the items on offer being the tasteless ‘I Love Boobies’ T-shirt with a few pairs of the famous blue feet of one of the Galapagos’ iconic birds arranged beneath the strap line. The dolphin cutaway creation in the picture also moved me to new heights of indignation: “Who buys this rubbish?” I wanted to scream – and who makes it?

I realise that my western sensibilities often have a large part to play in my perception of the environments I travel through. Who am I to get all ‘Prince Charles’ about the built environment when people with limited resources need places to live, sleep and make a living. Many people who live on the Galápagos islands are locked in their own Darwinian struggle for a share of the tourist dollars leading to a small town cauldron of jealous competition. In 2015 this led to the ridiculous situation of the gift shop linked to the Charles Darwin Research Station being forced to close due to pressure from local shopkeepers. The CDRS then began to suffer financial difficulties at the loss of revenue and the threat of closure loomed. The CDRS is instrumental in protecting and managing the very environment that tourists come to visit! British national treasure Sir David Attenborough has stated that “without tourism the Galápagos Islands would not survive”. That is indeed the case today, although a huge part of the revenue gained from tourism goes towards undoing all the hundreds of years of mismanagement wrought on the islands by man, the most invasive of species to come here. 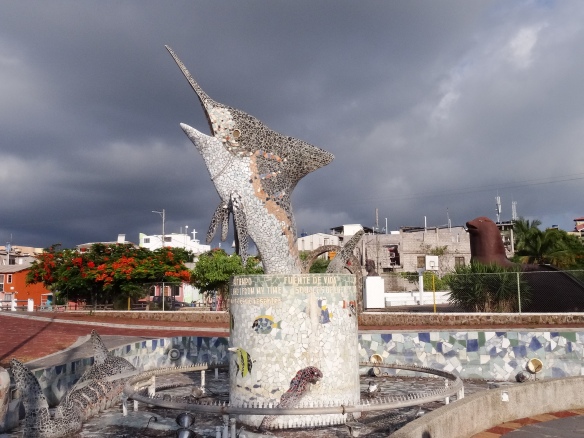 I still have the press cutting that I snipped out of El Commercio a month or more ago as an exercise in improving my Spanish. The journalist damned the lack of planning regulation in Ecuador, the use of poor quality materials and sloppy building techniques that lead to the horrendous sprawl of concrete constructions that are popping up all over this beautiful country. He also lamented the fact that scant regard was given to any serious measures for protection against earthquakes. Reinforced concrete is a wonderful material as far as compressive and tensile strength are concerned and has few equals. But when natural forces powerful enough to move mountains come into play it has fundamental flaws. In a cruel twist of fate, the wooden or bamboo building that people move out of, because a concrete home is seen as more permanent and sturdy, are the very ones that best withstand this sort of phenomena.

And so, as thousands of buildings in Ecuador lie reduced to rubble I reread what I wrote about buildings in the Galápagos with something akin to guilt. My privileged situation gives me very little right to condemn and criticise the homes that people in developing countries are able to afford. One can only hope that as the bulldozers clear the rubble to make way for the rebuilding that some form of policy will be followed to ensure a better quality of construction.

3 thoughts on “A Double-edged Sword”