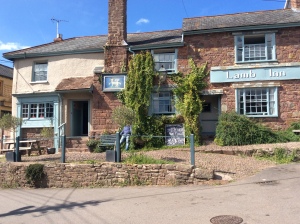 It was 3am in the morning and not a breath of wind stirred. As the shadow of the earth moved across the heavens the white crescent of the moon gradually disappeared and the sun’s rays turned the moon a deep, mysterious orange: a Hunters’ Moon. It was our first night in Sandford, Devon and having already enjoyed the gentle charm of The Lamb Inn we were in good spirits, unaware at that time, sat in contented silence beneath a magnificently bright Milky Way, that we were about to enjoy one of the British climate’s finest phenomena, an ‘Indian Summer’.

Monday morning broke cloudless and blue. The cats sat in the windows and stretched themselves indulgently before disappearing outside to murder as much small rodent wildlife as they could find. The wind was blowing from the East and I had solid information, courtesy of a website with the evocative title ‘Magicseaweed’, that a solid swell would be rolling onto the sandy Atlantic beaches of the North Cornish coast. We drove west through a busy countryside where farmers were making the most of the weather: ploughing, tilling and harvesting were in full swing. Coming over the final crest before the coast we saw clearly defined lines of swell as they headed for land. My brother was already in the car park pulling on his wet suit and soon we were both in our skintight neoprene, two ‘Silver Surfers’ ready to tackle the foaming briny. At 4-foot it was not large but with the offshore breeze brushing them to perfection it was a magical sight. The water was clear and bracing but not yet cold. The sun hung above us lighting up the water, the huge expanse of exposed sand and the dramatic coastal cliffs.

Tuesday was a gardening day helping two elderly parents keep on top of their large garden. A pleasure to toil in the sunshine and tame some wilder trees and shrubs. Ladders were employed, saws zinged, shears snapped and piles of brash were dragged off to the bonfire. Back at the cottage Grace was greeted with flowers from a white-haired neighbour and a promise of a tour of his wild flower garden. Another neighbour also popped round to invite us round for drinks and chat: apparently he has a fine collection of Gin. It was all shaping up splendidly.

Curtains were flung open early on Wednesday and heat poured in. What a treat to feel that much heat in late September. A walk along the Teign Valley eventually led us high onto the southern hillside where an iron-age hill fort was overgrown with mixed deciduous woodland, bracken and gorse. We ate nuts and seeds much as our distant forefathers might have done – although not in the neat format of a wrapped bar. Later a game of tennis for Sandford’s latest new member in the late-afternoon sun was tonic for the soul.

Thursday found us longing for wildness and so we headed to Dartmoor and a walk that traversed a ridge with tors whose names had piqued our interest. Bell, Chinkwell and Honeybag Tors stand high above Widecombe-in-the-Moor and are as beautiful as their names suggest. Ancient granite outcrops stand high above the valleys, heavily weathered and much reduced but still capable of enduring for countless millennia to come. The sun moved across the sky unhindered. Light shone evenly upon every living and non-living thing. It was simply magnificent and we made a mental note to ourselves that this was a place we wanted to spend more time exploring. Perhaps even live here when our vagabond days are done and dusted. So caught up in the magic and the mystery of it all was I that for the first time in many years I attempted to jump a 5-bar gate. Now the reality gap between my middle-aged exuberance, brought on by excessive exposure to sunshine, was in indirect relation to the height of the gate. Almost all of me cleared the top bar of the gate. All of me except my nose which sustained an impressive graze as I slid-cum-rolled over the top and then dropped into the deep grass. Grace was dumbstruck with astonishment and, as she graciously added as she was inspecting my bruised conk, quite impressed that I had even attempted this feat. 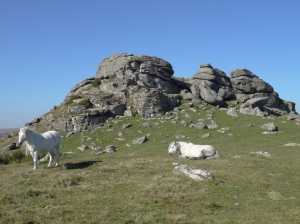 Friday saw us back in the aged parents’ garden and laying waste to an area just shy of the size of Wales. This area, overgrown for years, needed drastic action of an almost apocalyptic nature and the fight was hard. After, tired and aching, we inspected our wounds, deep bramble scratches traced across forearms and legs, vivid reminders of nature resisting our efforts to cut and uproot. That evening, showered and fed we headed up the hill to the Lamb Inn for an open-mic evening in the old skittles alley on the first floor at the back of the building. A comfortable collection of mature folk were already installed. Guitars were leaning against walls, microphones, a PA and a sound desk already set up. I love the preamble to any sort of small scale, intimate gathering for the production of song, music or the spoken word. It has a cosy quality that larger events do not and the proximity to the performer is vital to the experience as a whole. Having played guitar in public, both solo and with a band, I am hugely supportive of anybody who gets up in front of an audience to perform and try to keep a fully open and receptive ear to whatever comes my way.

The evening opened with some gentle guitar and vocals. This was followed by a magnificently white-pony-tailed man with matching beard whose pre-session chat mentioned that as a tree surgeon he had nearly had his arm twisted off at the shoulder earlier in the week so might be a little stiff on that side. His near de-limbing seemed to have had no adverse effect and he easily took things to a different level with some superb fingerpicking of one of my favourite Bob Dylan songs “Don’t think Twice’ and then some properly Bluesy Blues. Next we had the classic folk singer, earnest and keen to tell the origins of the songs, which as with a lot of folk songs went on for far too long. A trio were pleasant but instantly forgettable and they gave way to a singer-guitarist who, to my mind at least, broke one of the cardinal rules of open-mic nights. There are songs which come to be regarded as classics or that are so well done in the original that to even attempt to cover them is akin to tackling a musical Everest. He was not a great climber.

A highlight came in the form of the two youngest performers of the evening. A girl with a crystal clear voice who accompanied herself on keyboard with the assistance of a muscular guitarist. It was close your eyes and lose yourself in the melody type music, her phrasing, pitch and sense of expression perfect. Half way through a novel turn came in the form of some alternative comedy from barrel-chested Clifford. It didn’t all work but it was different and had me smiling throughout and laughing out loud on several occasions. A solo female singer was brave but too quavery and I thought we might have had the best of it when onto the stage walked a lively looking chap by the name of Curly Stew. He had a young Billy Connolly look to him which was instantly endearing and I liked the way he held his guitar and talked. Curly launched straight into a stonking version of Mr Blue Sky by the Electric Light Orchestra, a song that I had never heard covered by any stand up solo artist and one that had huge sentimental value for me as a lovelorn teenager seeing them live at Wembley Arena in the late 1970s. 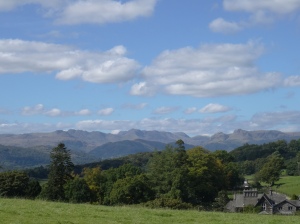 Walking back that evening beneath yet another starry sky the lyrics to Mr Blue Sky were running through my head, as were memories of the Indian Summer weather and a week spent making the most of every light-filled minute. The pleasure that can be triggered by good weather is on one level, absurd. Gratitude for sunshine seems extraordinarily simple and it is often tempting to deny the benefits of the weather altogether and to focus our thoughts on loftier issues. Surely we Northern Hemisphere dwellers should be able to shrug off 10-days of rain and a biting east wind. In reality our capacity to let go of everyday anxieties reveals that our moods are often determined by nothing grander than the number of photons of light in the sky and degrees of warmth in the air. Doubts about feeling pleased at a blue sky are ultimately a consequence of accidental snobbery. We may look down on a sunny scene which, it it were presented to us in a museum, we would take extremely seriously. Travelling to the Musee d’Orsay in Paris to see Monet’s delightful summery scenes is hardly a lowbrow occupation and thus when we sit on a sunny terrace and gaze out over a flower-filled garden we are experiencing much the same thing. It’s just that when a frame is put around an emotion we are inclined to be much more generous to it and what it has to offer. Monet was a great artist in that he knew how to draw our attention and lend dignity to minor natural phenomena in danger of being overlooked in a somewhat snobbish world. If joy at sunshine is worrying to people of taste and intellectual sophistication, it is because of a fear that paying attention to pretty skies will mean one forgets the actual condition of life: war, disease, poverty and political evil. But for the larger part of the human race we risk not a feeling of complacency at the chaotic state of much of the world but a fall into a furious, despair filled depression. And here the appearance of blue sky is the perfect tonic: flowers, a warm breeze, the smell of freshly cut grass, these are symbols of hope in which everyday, quiet, ordinary contentment is experienced. Sunshine isn’t merely ‘nice’ but has a profound role to play in our lives. It is a bringer of moral qualities: of generosity, courage, the appreciation of the present moment, confidence. When the natural world seems kindly, material accumulation looks less impressive. When there is easy living, competition loses its edge. When it is so hot, there is no point trying to read – or even think too much – which reduces our anxiety. One is merely in the present. We need the sun because we tend to be overly dutiful, serious, hard-working, disconnected from our bodies and cautious. It is a deeply noble search for wisdom and balance (which are the ideal goals of travel, philosophy and civilisation) which draws us outside on sunny days to places of natural beauty. Just to simply sit and stare.

“Hey there Mr. Blue
We’re so pleased to be with you
Look around see what you do
Everybody smiles at you”.

From the single ‘Mr. Blue Sky’ released on 28th January 1978 by the Electric Light Orchestra.