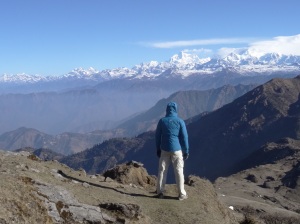 If you find yourself stuck for inspiration or down in the dharma doldrums then I believe I have the place for you. It’ll take a few days of fairly hard walking to get there and will involve some level of discomfort but, trust me, it will be more than worth it.

Arrive as early as you can, before sunrise if possible, and find a good spot out of the wind. Then face north, plant your feet firmly on the ground, connect with the earth and stand as still and as solid as the mountains you are facing. Keep your eyes wide open.

From west to east the outlines of Kumbhakarna, Kanchengdzonga and Siniolchu resemble a recumbent figure. Further west if you are lucky can be seen more lofty peaks, Makalu, Lhotse and Everest, whilst to the east are the peaks of Bhutan.

The place is a ridge behind the two lodges that constitute a place called Phalut at the northern end of the Singalila Ridge. It is a cat’s whisker below 12,000-feet and can be bitingly cold as the wind whips over the edge. There is a fabulous prayer wall at the top, so walk clockwise round that too before finding your spot.

Clouds will begin to form at some point during your time there unless you are blessed with one of those rare and beautiful cloud-free days. But these just add to the splendour of it all and many stream from the highest peaks so that it looks as though they are smoking. You may even see some extraordinary lenticular cloud forms on the highest peak and this again just adds to the sum of the whole.

I stood for as long as I was able before the cold really began to gnaw at my bones. I felt so immensely glad and lucky to be there. I dwelt on what constitutes my taste for happiness, what I often think of as “the intense joy I derive from being alive”, and realised that it is not blithe, but a deliberate weapon against rejection, boredom, stupidity and routine.

Meditation on a mountain: going nowhere, doing nothing, being no-one.

1 thought on “Meditation – on a Mountain”