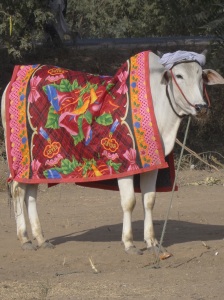 Being a cow can really help in India given the massive cultural respect and significance paid to the bovine race by those of a Hindu persuasion. For Indians honouring the cow is believed to inspire in people the virtues of gentleness and connectedness with nature.

The cow is a symbol of the earth, an ever-giving nourisher and undemanding provider. Cows only take water, grass and grain and yet they give in such abundance: milk, cream, yoghourt, cheese, butter, ghee and buttermilk. The ghee (clarified butter) is used extensively in cooking, in ceremonies and in preparing religious food.

Cows also produce a prodigious amount of waste product – much of which marks the streets in long slashes courtesy of a passing motorbike tyre. Often the dung is gathered, slapped between the hands to produce a ‘cake’ shaped like a discus and dried in the sun to be used as fuel. The smoke is considered to be a disinfectant and to have anti-pollution effects. The urine is also believed to have medicinal and religious properties (one of my favourite book buys in India was a little known offering entitled ‘Miracles of urine Therapy’. It did not sell well in the West).

However, some cows are more holy than others and for once in this country, whose own sex ratio can be staggeringly imbalanced, being a girl is what counts. So, being born a little bull calf is to draw a fairly short straw in a land not generally noted for its compassion towards the animal kingdom. Cattle roam the streets with impunity, often at their most serene chewing the cud on a busy roadside as traffic thunders past. I often wonder what is going on in their bovine brains. Do they ever ask themselves ‘something has gone terribly wrong, shouldn’t I be in a green field somewhere?’ We will never know if they suffer an existential identity crisis but they certainly slow up the traffic.

What I have noticed recently is that the majority of larger beasts are cows, whose occasional theft of a vegetable or two from a stall is tolerated on the whole and who are left pretty much alone. The smaller animals, often quite scrawny and malnourished are in fact the male calfs. Very few of their number are selected by their owners for safekeeping for future breeding purposes. Their fate is to be turned onto the street to fend for themselves as best they can. They are not so favoured when they try to take a carrot or cabbage from a stall and are chased off to search for nutrition in the piles of litter that clog every Indian town and village. Sometimes there is better fare on offer as unwanted or old food is thrown onto the street but there is fierce rivalry for it as dogs and pigs compete with them for every scrap – not to mention rats and birds.

But what to do with all these stray animals? As traffic continues to proliferate on India’s roads the cow increasingly becomes a source of congestion as they amble placidly amongst the melee. For some animals the cause of their demise is scattered all around them and they keel over with four stomachs so crammed with plastic garbage that their systems grind to a painful and permanent halt. And whilst the females provide useful products the males do not. What use for them among a Hindu population who do not eat beef? The solution arrives under cover of darkness in the form of lorries driven by illegal traffickers – often Muslim – not bound by the sacred bovine restriction. The stray males are rounded up and slaughtered well out of sight of the Hindu majority who turn a blind eye to this nocturnal cull.

So to be a cow in India is something of a mixed blessing even though they are protected under the Indian Constitution. One falls either into the select and blessed camp or the outcast and expendable one. But next time you pass one in the street, give it a pat. 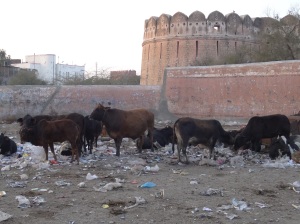 (Cow fan facts: there are 37 pure cattle breeds in India of which 5 are milk breed, several are milk and draught animals (they can plough or pull carts) and the remainder are pure draught breeds. Several exotic breeds have been imported but they are not well-adapted to conditions in India so their milk yield is half what it could be. The poorest economic strata of Indian society own 69% of all cattle. There may well come a time in the near future when India has to import milk as it is generally acknowledged that the government has mishandled the management of cattle on a national level. This has huge health implications for the massive number of vegetarians for whom milk is a key source of protein)