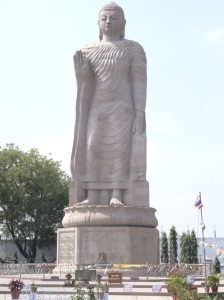 Foreword: I have put my shoulder to the wheel of the Dharma and nudged it round a fraction more. A week in near silence as a respite from India was just the tonic. But it was not all silence.

Noise must surely be one of the most distracting obstacles to an enjoyable meditation practice. The texts say that it is ‘only in the depths of silence that the voice of the absolute can be heard’. No wonder so many mystics disappear off to remote mountains in order to escape the hurly-burly that is the daily norm in India. Not being possessed of such an ascetically minded spirit or body I have no desire to spend weeks in a freezing cave wrapped only in a rug. Not even if total liberation and enlightenment are on offer. Thus we have to make do with the rather tamer setting of the Thai Temple in Sarnath, India. Famous to Buddhists the whole world over as being the place where ‘the Awakened One’ preached his first sermon after attaining enlightenment. We are here to retreat and recharge from India after just over 3-months here before setting off on our travels again.

But back to noise and a day in which two very different and challenging examples of sound intruded the peace of the meditation hall.

The morning was cloudy and cool. It had rained during the night and there was a dampness in the air. We all settled down in the large stone-floored hall, windows open, one light shining above a large sandstone statue of the Buddha. At 6:30am there was barely a noise from the road 100-metres away. The silence deepened. Then from overhead came a long, slow rumble of thunder, as if an enormous sheet of thick, wet canvas was being flapped with the occasional sharper crack. It then began to rain, slowly and steadily. As if wakened from their slumber the birds began their dawn chorus. The rain kept up its constant flow and the birds their morning songs. It was an enchanting combination made even more so by the frequent rolls of thunder. A meditation symphony if ever there was. Then, as though on cue, high above it all cut the clear note of a conch shell being blown at the temple. That sound for an instant seemed to freeze all the vulgarity and chaos around us into one moment of perfect synthesis.

Later the same day and we are all once again assembled in the hall for a sitting meditation. There is some traffic noise from the road, the usual horns and cries, but the main sound was coming from the Thai temple itself: a steady, almost nasal monotone drone. As a background noise it was not unpleasant with a humming through the teeth quality producing indistinct syllables with a dactyl-like character. In a very Buddhist sense it was a constant stream of prayer vibrating out of the cavernous temple and into space. Then with a crackle and a squeal of discord as connections were made came a ghastly intruder. Dark, ominous bass beats began to pound in an urgent 4/4 time. There was a military feel to it as in repetitive cannon-like thuds this modern anthem completely shattered the monks chanting. The bass ceased for a bar or two to allow some looped effect to have its moment before resuming again. It was Karma-Cola all over again. But this time it was not so much East meeting West as Old East meeting New East. It was a slam dunk. Buddhist chanting was no match for the Hindi Techno Wedding Machine.