The El Tigre bus shuddered to a halt at Platform 9. It looked nothing like the picture above the office where we had booked that morning. This ‘tiger’ was a toothless, slack-striped old growler of a machine. The day suddenly looked like being a lot harder than anticipated.

It was our first morning in Paraguay and we were fuzzy after a night of unbridled heat during which we had lain beneath a slowly rotating ceiling fan the size of a Spitfire propellor. Our arrival in Ciudad del Este the day before had also been a trial as we negotiated streets piled with boxes: full boxes, empty boxes, flattened boxes. Boxes being moved around on sack trucks, on heads, under arms, in wheelbarrows or on hand-pulled wagons. The whole city is one giant shopping-cum-contraband centre and it screams ‘BUY’ at you from every seam in its scrappily constructed carcass.

The ‘tiger’ took an hour to get out of the city but once on the open road, with a decent breeze blowing through the windows, one hardly noticed the constant roar from the old engine and the whine of tired bearings. We arrived in Trinidad 5-hours later. It was murderously hot outside and walking with backpacks was tough as we searched for lodging. After a few fruitless calls we found the Posada del Abuelo run by the cheery Alfredo Olmedo, an ex-combatant in the Chaco War according to the sign on his gate.

Towards sunset we found ourselves walking across green rye grass towards the Jesuit Mission of La Santisima Trinidad de Parana, the red sandstone glowing against the skyline as huge cumulus clouds built overhead. Once there had been a swathe of Jesuit ‘reducciones’ or townships across this region of South America. The first Jesuits arrived in 1588 with orders from Philip III to use only the ‘sword of the word’ to subdue the Paraguayan indians and to phase out the encomienda system of forced labour. This caused no small amount of resentment from settlers who depended on a constant supply of indian labour and concubines. And thus began one of history’s greatest experiments in communal living. The Jesuits soon had over 100,000 of the local Guarani people living in around twenty reducciones. Threats from slave-raiding ‘Mamelucos’ was a problem in the early years and settler resentment simmered as the reducciones became increasingly wealthy. But the Guarani enjoyed considerably higher living standards, were not made to learn Spanish and were protected from the settlers. And, in an act that seems hugely philanthropic for the era, all profits from indian labour were distributed to the labourers. This lead to much praise from many in the French enlightenment, not normally great fans of the Jesuits, prompting no less a personage than Voltaire to call the Jesuit government “a triumph of humanity’.

But fearful of the Jesuits growing power and wealth, and fuelled by several settler revolts, the Spanish King Charles III expelled the Jesuits in 1767. After a 160-year period this hugely successful system of governance was ended, the reducciones lost their valuables, became mismanaged and were finally abandoned by the Guarani. The Jesuits vanished almost without a trace.

Walking around the ruins that evening the site had something of the feel of a model village, all so well arranged around the central plaza which was now a vast square of close-cropped grass. The red sandstone had been exquisitely sculpted by the Guarani craftsmen, whose skill and aptitude at learning the fine stonemasonry of 16th-century Europe had astonished the Jesuits.

Looking out over what had been the orchard my eye was drawn first upwards to the glowering clouds and then ran across an undulating landscape of large neat fields and patches of woodland. There was an Englishness to it, Wiltshire perhaps, and a herd of Hereford cattle added more weight to this impression. But whereas England has multi-hued, chequerboard field systems, here all was given over to one dark green crop that I did not recognise. With a clap of thunder and an arc of lightning huge drops of rain began to fall on the warm paving stones. We ran for cover, sheltering in a vaulted cloister where a collection of carved stone was stored. Sitting on a recumbent saint without a head we attempted to decipher the inscriptions on the jumble of stones.

Forty minutes later, without a let up in the rain, we dashed to a restaurant displaying a flashing ‘open’ sign. We were the only customers and the young owners fussed over us, turning off the air-conditioner as we dripped and shivered in its cold blast. We ordered food and while his wife prepared it we chatted to the owner Jorge who had lost interest in the football match on the television. He was delighted that we were from England, his wife’s grandparents had come from a town in the north that he could not recall: her family name had been Bower and he wrote it on a napkin for us to appreciate. He was of German descent and wrote his family name, Wolff, next to that of his wife.

I asked what the crop in all the fields was and learnt that it was soybeans, mostly destined for export to the Far East. Jorge had owned some land but had sold it a few years earlier to a farming conglomerate from neighbouring Argentina. With a shake of his head he said that a lot of Brazilians and Argentinians were buying up land in Paraguay and converting it to soybean production. It wasn’t all amicable: small landowners were being forced off their land and then to migrate into the cities, there was crop contamination for those who stayed from the aerial crop spraying, pollution of rivers from herbicide and fertiliser run-off, and the deforestation was removing the last of the Atlantic forests that had carpeted the region.

Moving on the following morning we saw how the new ‘colonization’ of Paraguay by a mono-crop had rendered the landscape. Huge, unfenced fields stretched away into the distance on both sides of the road, the monotony broken only by stands of uniform Eucalyptus trees: along the roadside small and large billboards advertised fertilisers, seeds and herbicides. Slick modern warehouses with shiny Toyota SUVs parked outside were emblazoned with company names: Cargill and Monsanto were amongst them. Dealerships with tractors, combines and crop-sprayers parked at eye-catching angles trailed out on either side of every town.

We left Paraguay after just over two days having merely skimmed along the southeastern border formed by the Rio Parana. The serene beauty of the Jesuit missions was a reminder that something of great importance had gone on here. Today, however, the campesinos and peasants are not doing so well out of the latest wave of development. There is no great philanthropic spirit at work in Paraguay today which is fast becoming one vast blanket of Soybeans to appease China’s new found taste for soy-fed pork. 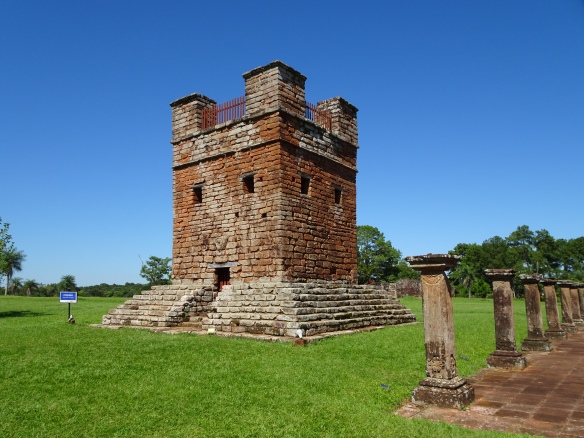 1 thought on “Weekend in Paraguay”