Mention British beaches to many foreigners and they will screw up their faces and tell you that they are all stones and rocks. Well, yes, there are some like that, as there are all over the world, but they are in the minority and the actual diversity of UK beaches is staggering. With over 7,500-miles of coastline the United Kingdom gives you a lot of coastal bang for your buck. But a certain part of that green and pleasant land holds what, to me, are some of the finest beaches in the UK and, I’ll go out on a limb here and say, one of the finest in the world.

All this thinking about beaches came about yesterday as I was strolling along Ipanema and then Copacabana beach in Rio de Janeiro – it’s not everyday you can say that! These two beaches are world famous, synonymous with visions of tanned Brazilian beach volley ballers and nymphs in minuscule bikinis. The reality, inevitably, is not always as good as the hype. At the height of summer when the mercury is hitting the high thirties it’s as if the whole of Rio decamps to the beach. The sand is packed with chairs and parasols right up to the water’s edge – and even the ocean is one bobbing mass of bodies. Vendors swoop amongst the masses hawking cold drinks, ice creams and just about every type of trinket ever conceived. It is an ant hill beside the sea, albeit a rather sedentary un-ant-like flattish hill.

Rendered sopping and listless by the blistering heat I was carried away to another beach, a beach where pink granite cliffs drop onto a sand beach composed of crushed, white sea shells. A beach with no visible sign of habitation to spoil the sweep of the cliff tops: where turquoise water washes in from the Atlantic Ocean; water that might not be tropically warm but can be comfortably refreshing at the end of the summer and is transparently clean and almost entirely rubbish free. A fine old pub is set back a short stroll from the beach and if one’s walking legs are in good shape the hike from the beach to Land’s End is one of the finest sections of the Cornish Coastal Path. And just to add that final touch of magic, there is an outdoor amphitheatre set on a granite outcrop above the ocean with the beach as a backdrop.

I acknowledge being unashamedly prejudiced in regard to this beach and stretch of coastline, but in spite of that admission I still consider this to be up there with very best beaches in the world – and that is speaking as someone who has seen an awful lot of beaches!

SO, it would be churlish of me not to divulge the name of my favourite beach, some huge clues have already been dropped and it is far from being a ‘secret spot’. Grab your car keys, head to far western Cornwall, spin down the narrow lanes and walk the sand path down to Porthcurno Beach: just be sure to do so at low tide, otherwise, no beach! And if that whets your appetite, get hold of the Cornish Ordnance Survey map, a copy of the current tide tables and set off in search of your own ‘hidden spot’. There are numerous places which even in the height of summer you can enjoy all to yourself if you are prepared to put in a little detective work and walk that little bit further.

Postscript: I mentioned having seen a lot of beaches, that is true, but more in the sense of walking across them to get into the ocean to surf. Thus I have also heard many people comment that there are no good surfing waves in the U.K. The picture below demonstrates how wrong that assumption is. 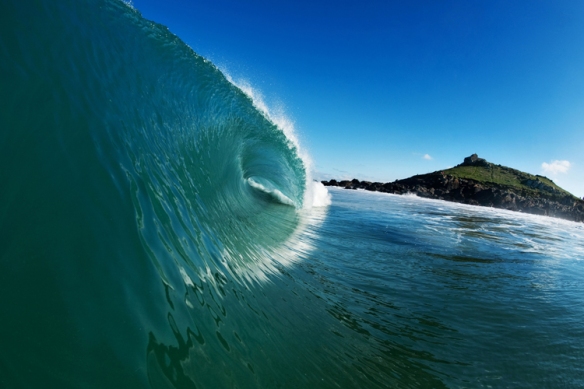 5 thoughts on “The Best Beach in the World”