During my early years a framed picture hung on the wall at the top of the stairs: a deep blue lake backed by numerous rocky peaks swathed at their feet by a multitude of conifers. It was a place in the Canadian Rockies near Lake Louise that my mother had visited in the late 1950s when she lived and worked in Canada. Photograph albums from that time pictured her on horseback with Canadian cousins or smiling as she sat in sleek finned cars from that era. Two of my maternal grandmother’s brothers had emigrated to Alberta in 1906 and 1909 respectively. Their half section of prairie measured a mile by one half mile and in photos seemed to be surrounded by a seemingly endless expanse of grass. A small wooden cabin was built and two draft cattle to work the land was all the extra muscle they had. Hard times, bitter cold. But they persevered and prospered and now we have a sizeable number of cousins living there.

I recently looked on that lake and mountain range for myself and experienced a strong feeling of visual reaffirmation. It was comforting to recall the many times I had paused at the top of the stairs to gaze at the photograph with its seemingly impossibly blue water and jagged mountains. I dreamt of travel often back then having hardly ventured beyond England’s shores. Now the little boy has grown up, become a man and has travelled widely. And standing at the edge of Moraine Lake it all seemed to come full circle. The lake is far bluer in reality than the photographic printing of the image could convey. The peaks too are bigger and wilder in their craggy configurations. But unlike in the picture there are people everywhere, chattering and posing is the order of the moment: the selfie stick is omnipresent, extended like some tentacle to be grinned at impishly. I had expected more peaceful contemplation but should have known otherwise: preserve and promulgate is the new world order. Nonetheless, standing there took me back to the top of the stairs and that brought its own sense of calm and introspection. Later we walked the whole length of the Valley of the Ten Peaks. For long periods it was wonderfully empty with just the odd Whisky Jack swooping out of the conifers to bob amongst the heather with cocked head turned our way. A party of elderly hikers were stopped watching a Wolverine disappear up into a far off ravine. We saw nothing but Marmots, those placid plump cushions of fur that dot sun drenched rocks.

Out on the Prairies much has changed. The endless swathes of grass are criss-crossed with gravel and asphalt roads. Huge oil storage silos dot the landscape and there are bigger homes now made out of precisely machined boards and roofed with bitumen tiles. With my cousins I walked their grandfathers’ old boundary lines and located old barns and homesteads with the aid of landmark trees that are still in situ many decades after they were planted. We drunk a lot of very good wine, ate some great food and through long conversations discovered that there was a lot in common, particularly a love of travel.

It took me a long time to get to Canada and I now feel as though I have placed a very important piece in my own personal jigsaw puzzle of the world. A jigsaw not just of places but also of people, of family. To be in a new place with new people, even for a relatively brief time, and to experience it and them firsthand, is to somehow absorb another sense of knowing into one’s collective impression of what constitutes this world.

Everyone should have a beautiful landscape picture at the top of their stairs. And they should go out and see it for themselves. 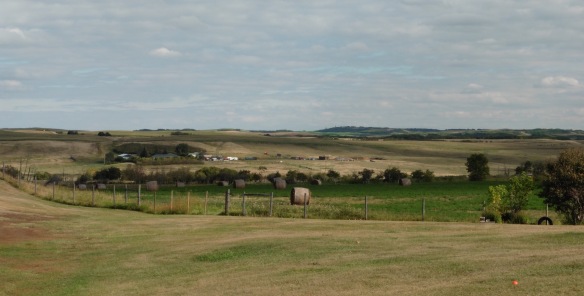 3 thoughts on “The Lake at the Top of the Stairs”