In the Orlando Greyhound Terminal all is hustle and bustle: a short young woman of astonishing pinkness is trying to coax a can of Coke from a huge vending machine: a small child is glued to her side literally riding on the roll of flesh that encircles her midriff. Seated across from us are three men who could step in as extras for a remake of ‘The Shawshank Redemption’ without a wardrobe change or recourse to a makeup artist. A man in baggy tracksuit pants shuffles from the ‘restroom’ clutching his groin: he needs to as if he releases the material the pants will fall to the ground, they barely cover his backside as it is. In the land where the car is king taking a bus might seem like a poor decision. Perhaps: perhaps not.

We are called to stand in line prior to boarding the bus. Wafts of humid hot air blow into the air-conditioned interior. Outside it is wiltingly hot. On the bus all pairs of seats have gone and Grace and I have to split. She gets a seat next to a slim young rapper type who is already lost to the music which pulses in a steady 4/4 beat from his stylish headset. To be close to her I have the choice of two places both of which are drastically reduced due to the bulk of the occupant in the other half spilling onto the other side. I choose the slightly better option and move to take up what remains of the seat. In front of me an aged anorexic is chatting to a woman who looks like she is a regular attendee at a cake bake, the image is of a cocktail stick sitting next to a tennis ball.

Everywhere there are tattoos on sunburnt, black or white skin. One old man has designs that have shrunk with his flesh to amorphous blobs on his liver-spotted and heavily freckled pipe-cleaner arms. There is a lot of gum being chewed in a slack-jawed, open-mouthed manner lending a bovine appearance to many on the bus as they graze social media pastures on their mobile phones. A girl across the aisle from me has more emoticons than text on her screen and slowly chuckles as more pop up.

Cake Bake and the Cocktail Stick are now really hitting it off and high-five each other in delight at some common ground discovered. I look out of the window to my right and at the same time take in the colossus beside me. He is dressed in the white sports garb of perhaps a basketball team, his ringletted hair is swept back and the large ponytail held in place with a gold braid. The phrase ‘built like a brick shithouse’ wanders into my mind and I struggle to place its exact meaning. As a truck undertakes us I read the advert on the side ‘Earn extra points and get more stuff’. Quite what stuff you get is not made clear but obviously more stuff is worth having. Cake Bake is now filming the edge of the highway and the pine forest behind as it flies past. She does this for 2-minutes. The storm clouds that have been building all day can take no more and in a short period dump a sizeable quantity of rainwater. 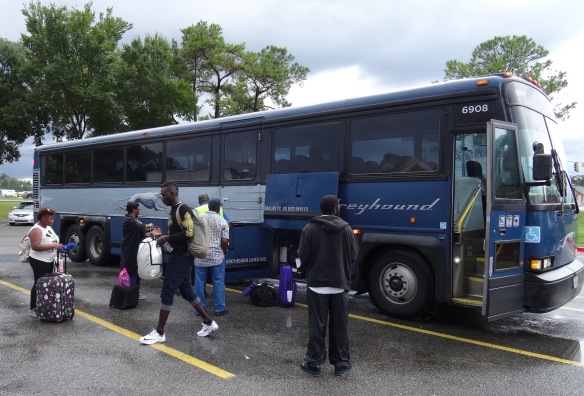 We stop in Jacksonville and there is a mass exodus for a cigarette break taken on the patches of steaming tarmac that rise between the large puddles that sit on the parking lot. I get off to take a photo of the bus and as I hit the outside air my glasses fog in the sauna-like mugginess. Others head off to the store and re-emerge with crisps, fizzy drinks and polystyrene trays piled with nachos and melted cheese. A man with a ‘Born in the State of Texaco’ T-shirt is arguing with the bus driver who has dropped his bag in a puddle. He has a shaved head and I can make out the shape of a scar as large as a downturned mouth above his left ear.

Back on the bus the air-con is on overdrive and people have pulled out blankets. A man walks up the aisle with a copy of ‘The Life Recovery Bible’ – author unknown – and something about his fixed stare recalls a character in Breaking Bad: I half expect him to stop and whisper “Say my name”.

To the rear a conversation catches my attention.

I tune in to more conversations, enjoying the accents and vernacular.

Cake Bake is now watching a replay of her movie of the side of the highway. I am drawn to watching it as well whilst in the background another potential movie flies past except now at regular intervals there are huge billboards set in areas carved out of the pine forest: ‘DivorceMenOnly.Com’ – ‘100% Meat, 100% Awesome’ – ‘Accident, Slip & Fall. Call: 567 3453’. And above even the highest pines on a single pylon the most instantly recognisable letter ‘M’ in the world.

A picture of a toned and fit young gym bunny flash up on the phone of the woman across the aisle and I am distracted for an instant. There are a lot of games being played on cell phones, chess on one but mostly coloured shapes which are flipped and switched by rapid thumbs movements. The colossus is now nodding off to sleep and slumping into an even greater portion of my seat. I am slightly wedged but not in an uncomfortable way so decide to let him be. My right hand touches his bare left knee, looking like a slightly squashed football, as it pokes out from his huge white shorts. Several rows ahead is a black woman with a head of wildly exuberant hair: part-Afro, part-curls, it is dyed in patchy shades of white to black and reminds me of something you might find in a shower to exfoliate.

In Savannah, Georgia we reach our destination. As we file off I stop to let the man with the downturned mouth scar on his head get into the aisle. His much worn and beaten looking face breaks into a smile, “Wye, theank you sir,” he says with a smile which borders on a scary grin. In the land where the car is king a bus ride is a colourful and observation rich experience.