The Toyota Land Cruiser pulled up outside the Butch Cassidy Hostal. I stepped outside and stretched a body stiff from 5-hours bouncing along rough dirt tracks. My mouth, like the rest of me, had a fine coating of dust and I spat gritty saliva onto the road. Bolivia tasted of adobe. In 4-days we had driven over 1,100-kilometres through some of the strangest terrain imaginable. The altiplano in winter, the dry season, is a near-deserted vastness of unprecedented geological complexity stretched out beneath a deep blue sky.

On our first day we had stopped at a deserted settlement from the colonial era that had once sheltered 2,000 souls, most of them slaves working in the mines to extract silver to satisfy the Spanish conquistadors’ insatiable lust for the precious metal. At over 15,000-feet it was bitterly cold: a mine shaft barely 4-feet across disappeared down into the ground at an angle of 60-degrees or more. I ventured down for a short distance before being overcome with an overwhelming sense of horror at the thought of having to go further in. There was a tomb-like feel to it, a biting cold, rough rock projections and an awful darkness disappearing away into the bowels of the earth. Back above ground with the sun in my eye I said a quick prayer, cursed the Spanish one more time and walked quickly away.

Later that day a twin-peaked volcano appeared on the horizon: Cerro Uturunku, at nearly 20,00-feet it is one of only a few mega-volcanoes in the world. Below ground large scale magma intrusions are causing a steady uplift that will eventually blow, removing a large portion of Bolivia, Chile and Argentina. It is forces like these that have helped create the unique geological phenomenon that is Bolivia. When the South American tectonic plate broke away from the supercontinent of Pangea it was forced against the Pacific plate which then subducted beneath it causing an unprecedented upwelling of minerals. This has imparted to the Altiplano a glorious palette of colours to offset much of the adobe coloured and water riven landscape. These present themselves at every turn: between two peaks a riot of reds and oranges striate at a slant; whilst across the plain atop an enormous pedestal of moraine sat a multi-layered topping of ochre, umber and off-white limestones.

That night in an unheated hostal we stamped feet and clapped hands to keep the blood flowing. The cold crept in nonetheless and even with sleeping bags and three roughly woven Llama wool blankets we slept fitfully. Morning was even colder, or so it seemed, but the sun’s appearance set in motion the mercury’s slow climb. There had been an unseasonal snowfall two days prior to our departure and as we headed further south large drifts began to appear and distant mountains were white. Luckily a grader had made a single pass on the only dirt road that heads to the border with Chile and the Atacama Desert that sits behind the range of volcanoes we were aiming for.

Swinging round a wide corner a truly spectacular sight came into view. Volcano Licancabur was speckled with snow which against its seemingly solid black mass lent it a weirdly two-dimensional aspect. It’s near perfect cone had an almost Dali-esque wisp of cloud arranged above the peak. We pulled to a halt and got out to take photos, wind whipping fine snow against our legs. A line from a favourite Bob Dylan song came to mind ‘We came to the pyramids all embedded in ice, the wind was a howling and the snow was outrageous . . . ‘

As we got closer the scene became even more surreal as we saw the extraordinary Laguna Verde sitting beneath the volcano. Waters agitated by the strong winds had stirred up the lake’s sediments of magnesium, copper, lead and arsenic to produce a vivid green. It was a view unlike any I had ever seen before, otherworldly and startlingly beautiful. Climbing a small rise we then had views across to Laguna Blanca, the sister lake, coloured white by plentiful deposits of Borax.

It would be easy to lurch into hyperbole but the following day delivered more sublime landscapes to thrill all but the most aesthetically challenged and drive geologists to paroxysms of pure pleasure. There were geothermal pools; geysers, fumaroles and bubbling mud pots; volcanoes; lakes where three varieties of flamingoes sieved the algae rich sediment; Llama, Vicuña, and the odd Alpaca.

A belt of rock burst through the plain and continued almost unbroken for 70-kilometres. From a distance it resembled a massive city, closer up it was carved into fantastical shapes that reflected the intense light in vibrant red to orange to ochre tones. We walked across the frozen Laguna Negra as small groups of Llama, ears bedecked with coloured ribbons denoting ownership, picked at the desiccated Paja grass and other low lying shrubs. Beneath large overhanging tongues of rock low walls created the most basic of shelter and indicated the presence of small communities who had clearly managed to eke out a living of sorts. Throughout our trip isolated small groups or single adobe block huts stood as roofless witnesses to further settlement, now abandoned for reasons we would never discover. The snow retreated as we headed back up north and we finally came to a small ‘poblacion’ on the edge of a region of unparalleled flatness: the Salar de Uyuni. A quick walk around the village revealed quite the drabbest main plaza we had ever come across; it was bleakness incarnate, without colour, or soul or people.

In the following morning’s pre-dawn we pulled on clothes made only slightly warmer by having been placed between the sleeping bag and the blankets. A brief bano visit and we were soon cruising serenely across our smoothest surface for days, the largest salt pan in the world. Hexagonal salt tiles stretched away in all directions and at 80-kph it felt like flying very low across frozen water. Beneath several metres of salt crust was a pool of brine in which was dissolved a metal that had the potential to drive Bolivia’s economy for the next century. Lithium, every smartphone, laptop and hybrid car battery depends on it and there is estimated to be as much as 70% of the total world supply waiting to be extracted. The current president, Evo Morales, has refused foreign offers to help exploit the Lithium and a Bolivian project is underway to develop the technology that they currently lack. And quite right too: Bolivia has already been robbed of so much mineral wealth by foreign agents that this time they need to hold on to as much as possible. Outlaw capitalism can saddle up and ride off into the sunset.

Sitting in the centre of the Salar a few remnants of the tops of ancient volcanoes poke above the crust like ‘islands’. The shape of Isla Incahuasi began to grow larger and we were soon parked at the base and then began the climb to the top of the island a couple of hundred feet above. The once submerged landscape now resembled unusual and fragile coral-like structures and was dotted with slow-growing Trichoreus cacti. On all sides the seemingly unending salt flats pulled away with only the the snowy peak of Volcan Tunupa rising high on the northern horizon making any sense of a full stop to it all. 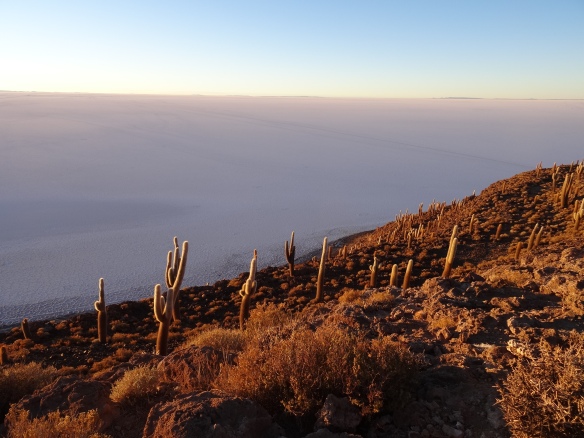 The summit was abuzz with tourists, selfie sticks and look-at-me poses were everywhere. The sun rose and cameras worked overtime to try and capture the multitude of effects happening with every change in tone of the light. It was beautiful even with the crowds and there were quieter spots to sit in peaceful contemplation. But not for long as with a steady breeze blowing there was a devilish cold drawing the heat from us.

Leaving the salt flats we stopped awhile to take some posed photographs: it is almost a ritual out here and not to have done so would have been to miss an opportunity afforded in few other places.

The main jumping off point for the Salar, Uyuni, is no picture postcard of a town lacking even a few colonial buildings to grace its main square. It is a Mad Max jumble of a place complete with a fair supply of ‘Gringo Garnish’, backpacker hostels, tour agencies, pizza cafes and generic souvenir outlets. The formula rarely changes, satisfying many but ultimately a shallow dip in the pool. A few kilometres outside the town a ‘Train Cemetery’ made for a brief stop to look over these once thunderous hulks of riveted steel that now provide yet more photo opportunities and some space for aerosol artists.

The return trip to Tupiza followed a dry river bed for the most part and the carving out of a new and improved highway to eventually be coated in glorious asphalt. Half way back we passed a signpost to San Vicente and I again gave thought to ‘Los Bandidos Yanquis’, Robert LeRoy Parker and Harry Longabaugh, aka Butch Cassidy and the Sundance Kid. It was in San Vicente, or so the legend goes, that they were finally gunned down by the Bolivian army – although the history is somewhat inexact having been ‘Hollwoodised’. I recalled Bruce Chatwin having mentioned that Butch and Sundance, as well as Etta Place Sundance’s lover, headed down to Patagonia after their final (or so they thought at the time) bank robbery and set themselves up as cattle ranchers. Their remote idyll came to an end when Pinkerton’s Detective Agency heard of their location and headed to Patagonia in search of the outlaws. Heading back north they found themselves in Bolivia or perhaps they headed there on purpose? This huge region of canyons, mountains, dry river beds and immense rock strewn corridors where a pair of men on horseback could lose themselves indefinitely. But despite all Bolivia’s prodigious amount of camouflage they were finally pinned down in San Vicente – or thereabouts – and perhaps, realising their number was up, did make that suicidal dash into a hail of Bolivian lead.

Dust to dust. As Sundance says to Butch in the film “Jeesh, can all of Bolivia look like this?”