Sunday dawned deep blue and windless, a perfect combination. Closing the window and walking to the bathroom the aches from yesterday’s rapid ascent of Montana Machu Picchu – 1,850-feet in 50-minutes if you care to know – were experienced afresh. Today was therefore designated a rest day and also happened to be the final of the French Open taking place over 6,000-miles away and 6-hours ahead of us in Paris. Andy Murray would be taking on Novak Djokovic, a scenario that is currently the greatest rivalry in tennis. Murray would be playing to gain his third Grand Slam and a place amongst only ten players to have won three slams, whilst Djokovic would be playing to be the current holder of all four grand slams, a feat achieved only by a few other players in the entire history of tennis in the open era. It was also National election day in Peru. Setting my priorities accordingly we went in search of a television set that might happen to be capable of showing the tennis.

The main square, the Plaza de Armas, was abuzz with local people in town not only for the local market but also to cast a vote. We slipped amongst them, taller and more ergonomically dressed in trekking gear, the dull fish in the aquarium besides these technicolor poncho’d, skirted and hatted folk. In a land once devoted to the worship of the sun god Inti these people who call the Sacred Valley home were wrapped in colours fully suited to capture the sun’s warm embrace and show it off to best effect. Drinking cappuccinos in a cafe on the square we watched the results from Paris flicker across the iPad screen – a live stream would be asking too much of the town’s meagre WiFi capability. Andy Murray had taken the first set but had then suffered an early break in the second. A week or so earlier he had beaten Djokovic on clay so the omens were good but in Pris he had made heavy weather of some of his matches in the early rounds. As so often when Andy met Novak it could be a rollercoaster of a match.

Having been given a few leads to follow in our search for cable we entered a cafe and saw a large TV fixed to the wall, ‘cable?’ I asked but a shake of the head said otherwise. In the next place an elderly man climbed slowly onto a chair to switch the TV on and then fumbled through the channels – four in total – before admitting defeat. I thanked him and on we went. In our third port of call a woman gave me the card of a hostel on the far side of town. Clutching the card we made our way back across the main plaza: it was now even more energetic, short stocky village people rocking in all directions or sitting in the increasingly warm sun to chat. In the market bundles of green fodder were piled high on the roadside and dogs rifled through bags of garbage. Heading down a deserted street our search for connection with Paris and a Grand Slam final looked unlikely. But with a word from a friendly moto taxi driver we turned a corner to see a crudely painted sign that matched the card I held in my hand. The bell was answered by an old man who greeted us warmly and ushered us into a large flower-filled courtyard. Standing before him I explained in my best Spanish that we had been told that cable television was available here and that being a tennis fanatic would dearly like to watch a championship match currently being played in Paris, France. Without a flicker of inconvenience crossing his face he beckoned for us to follow and led us into one of his small guest rooms where a huge CRT television sat on a tiny chest of drawers. Switching it on he called out and soon a small boy appeared with a remote control in his hand. The child attempted to engage the cable connection but managed only to receive local channels most of which were broadcasting the latest election news. The battle – and it had been an ugly election build up – for control of Peru was a two horse race. In one corner stood 77-year old former Wall Street banker Pedro Pablo Kuczynski propped up by an alliance of socialists and free market conservatives. In the opposite corner was 41-year old Keiko Fujimori daughter of Alberto Fujimori who was serving a 25-year prison term for directing death squads, embezzlement and bribery during his 1990 – 200 presidency.

The old man’s wife then called to us from the courtyard and asked us to follow her. We entered beneath a low doorway and found ourselves in the couple’s kitchen. A stainless steel sink and drainer was piled with washed vegetables: the wooden table was covered with newspapers, cups and a half-knitted garment. Walls were plastered with faded family photographs and Peruvian scenes but what stood out in almost grandstand proportions was an LCD television the size of a pool table. SOmewhat shocked by finding a television of such modernity and size in such a humble space I then noticed that it was framed by a cornucopia of Catholic frivolities and iconography: a particularly bloody Christ peered down from amongst a riot of rather dusty dried flowers: various virgins, saints and devil tormented sinners were pictured in ornate gilt frames; there were beads and crosses, printed prayers and symbols. It was a television framed by visceral religious excess.

When the TV switched on the room was bathed in light. I was handed the remote and the Senora turned back to deal with her vegetables. Before sitting on the sofa it was necessary to pick a couple of biscuits off the seat cushion and throw them towards a slumbering dog at the other end. Flicking through the channels more election news dominated. Today Peru had the difficult and unenviable task of choosing between two candidates both of highly questionable legitimacy: Fujimori and Kuczynski – both of whose surnames are not of Peruvian origin, but then Peru has a long history of being governed by people with connections to other countries. Huge demonstrations in Lima had exhorted voters to cast in favour of Kuczynski as being the ‘lesser evil’ candidate. Pundits in the local and international press then explained that a vote for Kuczynski’s PPK party was not a vote in favour of them or their policies but was more a vote of resistance against ‘Fujimorismo’.

Scrolling through countless channels looking for ESPN on the giant screen we came to the sports section. Bingo, a flash of brilliant red clay court appeared for the shortest of moments before being covered with a large panel that we quickly translated. ESPN was not a part of this ‘packet’! At that point I decided that the hunt for Grand Slam tennis was over and we would explore other avenues that afternoon. We thanked the aged couple and still they were as charming and smile-filled as ever. I had the impression nothing would be too much trouble for them, that no matter how strange a request arrived at their doorstep it would be dealt with as easily as asking for a cup of sugar. 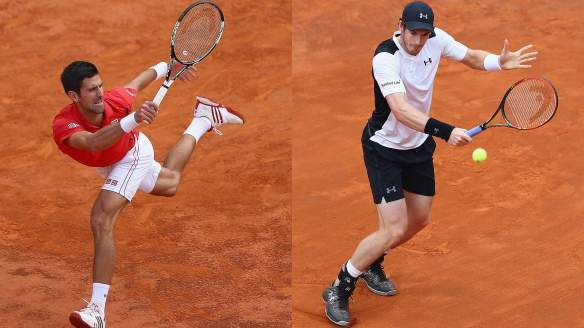 A quick check on the iPad as we recrossed the square revealed that Djokovic had taken the second set and was moving in aggressively on the third. This can happen in matches between these two: Murray often dips and then needs to get angry with himself in order to shake out the kind of stubborn, gritty ‘never-give-in’ type of tennis at which he excels.

Looking beyond the confines of the main square my eyes were pulled up to the fort high above the old Inca town of Ollantaytambo. Rows of terraces piled one on top of another until they hit a narrow ridge where the finest of the Imperial style of Inca stonework sat. It was here in 1537 that Manco Inca had one of the few successes the Inca managed against the Spanish conquistadors, who with their horses and steel swords were all but invincible on flat ground even when confronted by overwhelmingly superior numbers. Keeping the Spanish penned in on a level piece of ground with a continual barrage of slingshots, rocks and arrows the Inca warriors diverted a large water supply out onto the flat ground and it soon became a quagmire in which the cavalry floundered. It was a short-lived victory and before too long the Spanish were back and Manco was forced to retreat ever deeper into remote pockets of what remained of his empire. It was the final chapter for the relatively short-lived Inca rule.

As Peruvian votes tumbled into ballot boxes all over the country Andy Murray was overcome by the relentless perfection of the Djokovic groundstroke. In the local news the difference between the two prospective presidential candidates was less than one percentage point. Votes from the remoter communities and the Peruvian diaspora could take over a week to come in and be added to the tally. The main square was a lot quieter now and a lot less colourful. Above, the fortress caught a beam of the setting sun and the huge blocks of stone in the Temple of the Sun stood as unshakeable as when they had been so skilfully placed over 400-years previously. Peru, as so often in the past, is caught between a rock and a hard place, waiting for the next big change.

1 thought on “Tennis and Tension in the Sacred Valley”