The passenger compartment in the boat, although open to the elements at the rear, was stiflingly hot and airless. We were all arranged along either side on padded benches with the hard upright walls as support and a pile of luggage on the floor in between. The roar from the three Mercury 200 outboard engines was horrendous and together they raised an impressive ‘rooster tail’ of wake almost as high as the boat itself. The only saving grace on this infernal journey was that the sea was smooth apart from a very long-interval swell which came at us exactly side on and thus did not cause any stomach unsettling motion. Two hours later we staggered off the boat with our bags and after leaving the jetty headed for a cool corner to sit and recover. On climbing the steps up to a thatched circular pergola and stepping into the shade I saw that all the benches were occupied by sleeping sea lions. Welcome to the Galápagos Islands.

We grew very accustomed to the sight, sound and smell of these sea lions in the days to come. A huge colony would assemble most evening on the main harbour beach in Puerto Baquerizo Moreno on San Cristobal to snooze, snuffle, preen and surf the small swell that rolled in between the boats anchored offshore. In many ways they had all the qualities of a flock of sheep settling in for the night, the bleating of the small pups who’d strayed too far and lost their mother, the dry coughing alternating with a retching noise, the odd honk and play fighting amongst frisky young males. Laid flat out on their backs like young puppies they often dozed in groups of three, top to tail to top. From a distance the beach appeared to be covered in a multitude of shiny tapered sacks with outstretched flippers looking like large labels. The sight, the sound and then the smell. Strong, pungent and lingering: a smell to catch in the back of your throat, ammonia and more than a dash of Vietnamese rotted shrimp paste. Hah, I love the smell of sea lion in the morning.

Apart from this urban setting to set the sea lions against there was the real show, the theatre in which they truly showed off their skills. On the western side of Isabela island is a steep rocky cliff called Punta Vicente Roca. Here the basaltic layers of millennia of volcanic upheaval drop a hundred feet straight into water as clean and clear as a baby’s eye. We snorkelled there late one afternoon as the sun was dropping behind volcano La Cumbre on Fernandina Island. The water was a dark and mysterious shade of blue-green with all manner of shapes drifting about way below the surface. We hugged the cliff edge and swam together. There were fish a plenty, huge schools of yellow-tailed surgeonfish, Moorish Idols, Guinea Fowl Puffers and Streamer Hogfish. Then surging up from the depths came a large sea lion who pirouetted just in front of us before heading off down along the cliff. We flippered after him and came to a point where the swell was breaking on a huge barely submerged rock that lay directly beneath the mouth of a large cave. Just below the surface two sea lions were wrapped in each other’s flippers, oblivious to us, lost in their gentle lovemaking. We stopped and observed as they rolled and twisted in each other’s embrace. The male then broke away from his companion and headed straight for Grace who was by now 15-feet to my left. At a metre’s distance he stopped, looked and then presumably reassured returned to re-entwine with the waiting female.

I was then distracted from this tender scene by the appearance of two smaller bolts of silvery speed. They raced around the submerged rock and then down beneath me. I twisted to keep a sight line on them but they were always moving just ahead of me no matter how fast I turned. A wave took me directly above the large rock, on the other side I saw one whiskered face slow to look at me and for the briefest moment had the impression that there was a smile playing across that bear-like face. The swell sucked out again and I was dropped onto the rock, sliding and rolling down the slick surface. Picked up again and carried away to one side I saw the pups below me, side by side and moving at unbelievable speed as though they were in air. I was outclassed and outmanoeuvred in every way.

For me that memory remains one of my strongest and fondest from the Galápagos. But the impression that remains most vivid is the reality of stepping into a world where a human being is not automatically seen as a threat or a predator. To move through an environment where one’s presence does not cause every other living thing to take flight is truly precious and hugely deserving of conservation. 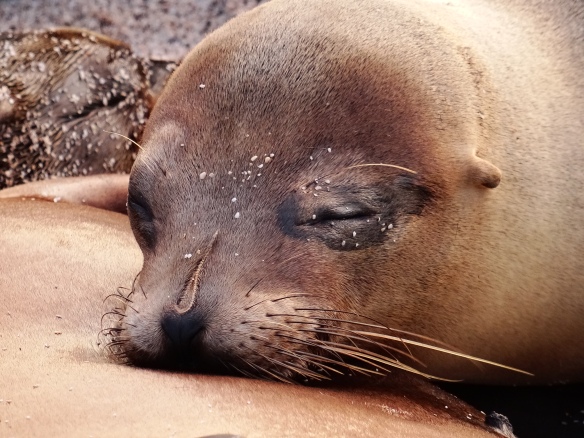 1 thought on “Welcome to a New World”